Introduction to the Kogi (by Kathy Doore)

What follows is a good summary overview of the Kogi: who they are, and why their presence in the world is important at this time. It is reprinted here with permission from the author Kathy Doore. Her site, and the original article, are located here.

Perhaps the only inaccuracy in this article is the original title. The Kogi would hardly think of themselves as a”lost tribe”. Rather, from their perspective it is Younger Brother (most of the rest of humanity) that is likely lost. The Kogi very intentionally lived in seclusion and relative secrecy. It was a choice they made in order to protect their ancient knowledge on how to keep the world in balance. 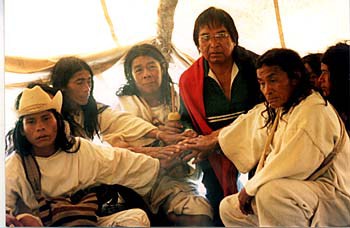 Emerson Jackson, Dine Tribal Elder, with the Kogi of Northern Colombia, shown above.

The Kogi know secrets about nature that would make our scientists rethink their ideas on the environment and the universe. They have a presence about them that commands respect. The power of their mind is beyond comprehension. But few people outside of Colombia know who they are and what they represent. Why do they call themselves the Elder Brothers and how can we learn to live in the spiritual world that this lost tribe lives in? Eight years ago I saw an amazing video called “From the Heart of the World, The Elder Brothers Warning.” It was about a unique indigenous community that lived in Northern Colombia who say they are keeping the world in balance. I was so impressed with these people because they are still living with the same spiritual values and traditions of their ancestors. But the ecological warning the Kogi shared touched a nerve and made me realize they may be right.

Who Are the Kogi?

When the Spaniards arrived in Northern Colombia 500 years ago, the Kogi fled high into the Sierra Nevada de Santa Marta. They believe the Sierra Nevada to be the “Mother” and the “Heart of the World.” The Sierra Nevada, in the shape of a pyramid, rises from the sunny coasts of the Caribbean tropics to the chilly, snow-capped peaks that reach a height of 17,000 feat above sea level, all in only 30 vertical miles. It is isolated from the Andes range, but can be viewed spiritually as the crown chakra of the Andes. In 1988 the Kogi allowed a BBC journalist, Alain Ereira to film a documentary about their culture. This was a historic event. No western journalists has been allowed to return since and the Kogi remained silent observing the ecological destruction of their sacred mountain. But the Kogi are concerned about what is happening to their sacred Mountain. They are now ready to share their next warning and message to the “Younger Brother.” We are the “Younger Brother” who are destroying the Earth and causing an ecological imbalance that may affect future generations to come. The Kogi are the direct descendants of the Tairona civilization. The Tairona culture flourished in Northern Colombia around 1,000 AD. They left behind stunning gold artwork, stone and pottery artifacts and an amazing network of brick roads covering the Sierra Nevada. Kogi society has changed little in the past five centuries. They survived as a culture because the Kogi focus all their energy on the life of the mind as opposed to the life of a body or an individual. Fundamental to that survival is the maintenance of physical separation from their world and our own. The Kogi do not allow anyone into their land. They are very protective of their sacred space and the dense jungle is not kind to tourists. Very few Colombians dare enter into their territory.

Where do the Kogi live?

The Kogi live in the higher regions of the Sierra Nevada. Many self-sustaining communities are on the Western part of the Mountain accessible through Valledupar, which is located in the State of Cesar. You can also enter Kogi land via Santa Marta, a coastal city, but it is a little more difficult. The Sierra Nevada is the highest coastal mountain in the world only 26 miles from the beach. It is located near the Equator, which means it has no seasons. Day and night are of equal length all year round. It has every eco-system in its 17,000 km2 area (8,000 sq. miles) You can find coral reefs, mangroves, arid deserts, rain and cloud forest, and in the higher elevations, plains and snow-capped peaks with temperatures close to –20 degrees. The highest peak is the Pico Simon Bolivar at 5,775 mtrs. In 1965, archeologists found the remains of a lost Tairona religious site and called it the “Lost City.” It is a three-day hike in dense jungle to witness a true wonder of the past. Rumor has it there are 2 more lost cities yet to be found.

Why are the Kogi unique?

The Kogi are unique among the world’s indigenous cultures because the Spaniards never conquered them. They are said to have memory of the beginning of time and remember the rampage the conquistadors brought to their region in 1498. The Kogi represent the most complete surviving civilization of pre-Colombian America. They are not hunter-gatherers or a wondering tribe; they are a nation whose fields have been continuously cultivated for more than a thousand years. The Kogi believe they are the “Elder Brothers,” the guardians of life on Earth. Through their mind power and meditation they keep the world in balance. They live in “Aluna,” an inner world of thought and potential. They are now concerned because their Mountain is dying. Everything about their history and religion is passed down through oral instructions and their lives are run by the spiritual leaders or Shamans named “Mamas.” The Kogi Mamas are chosen from birth and spend the first nine years of childhood in a cave in total darkness learning the ancient secrets of the spiritual world or Aluna. They are the priests and judges who control Kogi society. All major decisions and shamanic work are done by Divination. All is the world of Aluna, so the Mamas see a reflection of the physical world first in the spiritual world. If Aluna is the Mother, then the Kogi listen to the Mother by divining. This lost technique of divination is what keeps the Kogi world in balance and order. The Mamas are worried that the “Younger Brother” has not heeded the first warning. If the Sierra Nevada or the Mother dies, the world will also die. Of unique importance is that the Kogi are a peaceful tribe that have never killed one of their own and rarely intermarry. They never grow grey hair and have no facial hair. They can spend 9 days awake without sleep during their ceremonial rites. They are now beginning to learn Spanish because they realize the importance of communicating with the outside world. They also need to understand the Colombian Government’s laws regarding the Sierra Nevada, which was named a Human and Biosphere Reserve by UNESCO in 1986 and a National Park by the Colombian Government in 1977.